Not every life-changing event happens on the road to Damascus: a blinding light, knocked to the ground, twitching galvanically. The death, the religious conversion, the falling in love. But there are smaller turnings also, often dozens of them in a life, perhaps passed unnoticed at the time, but nudging our lives on a slightly new heading. “As the twig is bent, so is the tree inclined.” The butterfly in Brazil. These are also life-changing.

In the summer of 1972, the Museum of Modern Art in New York mounted a small exhibition in its downstairs gallery, behind glass doors. “Atget’s Trees” put together 50 photographs by the French artist Jean-Eugène-Auguste Atget (1857-1927). Lined up on the wall in a darkened space, with brilliant track lighting that made each photograph gleam like a jewel, the photographs made my heart jump and my eyes happy. (That kind of lighting is now largely verboten in museums, as they adhere to a strict limit of only so much illumination to protect sensitive materials from light damage. Silver-image black and white photographs are largely immune to such light damage, so the restriction on lighting seems shortsighted and misguided; it dulls the brilliance.)

Atget (At-zhay) was an odd little man who taught himself photography in order to document art, architecture and decor that was disappearing as Paris and France entered the modern world. Originally, beginning in 1890, his work was meant for painters, architects and stage designers to provide models for their work, and he sold his pictures to them. But he seems to have become more and more interested in the details of his city for their own sake. He took thousands, maybe tens of thousands of negatives. Many were sold to various institutions interested in historic preservation, such as the Bibliothèque Historique de la Ville de Paris.

In 1925, he met American photographer Berenice Abbott, who began buying his photographs and collecting negatives. In 1968, she sold her collection to MOMA, from which the “Atget: Trees” show was developed.

The majority of Atget’s subjects were buildings, statues, door knockers, gardens and street scenes. No detail was too humble for his attention. There are photographs of doors, photos of stairways, photos of balconies and railings, of fireplaces, of courtyards and alleyways. His curiosity was omnivorous and ravenous.

But through all, there was one subject he came back to over and over: trees. Most were in parks, like Saint-Cloud or Sceaux; some were at Versailles; others simply out in the countryside. He seems especially taken with ragged bark and gnarly roots. Often, he has photographed the same tree over and over, from very slightly different angles, or in different seasons. There is something sensuous in the growth and surface of trees that excited his artistic libido.

Atget’s equipment and technique were already antique when he began, using an old bellows camera and large negatives, printing them on albumen paper and toning them with gold chloride. This gave his images a sheen (from the egg white) and rich, chocolatey tone (from the gold) that, in the right light, makes them jump from the frame with gem-like luster.

And there I was, in 1972, ripe for the message they were giving me.

You have to remember that 50 years ago, the art world — and especially the world of photography — was deeply buried in a type of snooty puritanism. We were taught you never “crop” your images, but framed them precisely in the viewfinder. Anything else was “sloppy” and perverted the natural uses of the camera. You must used archival paper and processing. Frames must be neutral, matting must be white or ivory. 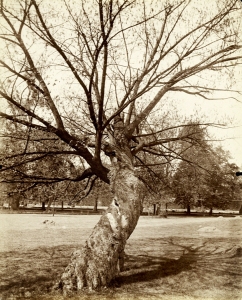 And most of all, you were made aware that a photograph was all about photography. Art about art. Subject matter hardly mattered; it merely provided an armature on which to make your statement about the nature of photography and art.

This was the art world the late Tom Wolfe railed against in his book, The Painted Word, where the deacons of art criticism slapped their hands down on a kind of outstretched bible of certainty: A painting must be flat, it must not mix genres, it must investigate the possibilities of paint and never, ever “illustrate” a story or event. Hellfire and brimstone of a different sect.

This was the heyday of Ansel Adams and his Zone System of photographic exposure and development, to carefully control the results, which were by necessity “previsualized,” i.e., you were to know before you snapped the shutter, exactly what the end result would be, including its printed size and what sort of paper you would print it on. God, it was constricting. What a constipated way of approaching art. 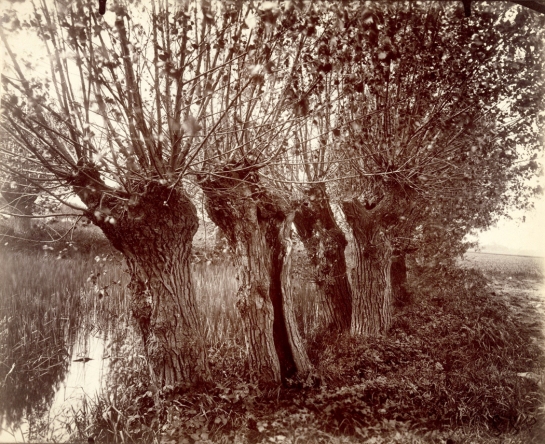 And here was Atget before my eyes, messy, uncoordinated, obsessive and obviously fascinated with the things of this world.

Not that it made a dent in the attitude of exhibit curator John Szarkowski, one of the deacons of that puritan orthodoxy. Szarkowski was Director of Photography at MOMA from 1962 to 1991, and one of the most influential voices of the time. He performed many miracles for photography as an art at a time when the status of photos was still doubted in some corners of the art establishment. But he also issued some very dubious edicts.

About the “Atget: Trees” exhibit, he wrote in a wall label for the show, “On the basis of a small and heterogeneous collection, the quality of effortless poise that identifies Atget’s work might easily be read as naivete. A study of his repeated investigation of the same or similar subjects, on the other hand, suggests a conscious and sophisticated concern with the ultimately formal problems of picture making.

“Atget was acutely aware of the literally infinite number of images that are potential in a given ‘subject,’ and he knew also that none of them was true, in the sense that it shared a privileged identity with the object photographed. The subtle variations in framing included here among the six plates of the Beech Tree, St. Cloud, for example, make it clear that Atget did not confuse the subject with the object. He understood that the true subject is defined by (and is identical with) the picture.”

That is art gobbledy-gook for, “Don’t think Atget was a bumpkin. No, he knew that the real subject of a photograph is the photograph itself, and the finished print, given to us, is the only actual goal of taking the thing in the first place.” (I especially note the condescending quotation marks around “subject.”)

And that, my friends, is a complete misreading of Atget and his art.

What I came to realize, adoring those luscious trees on the wall of 53rd Street, was that what mattered was not the print, but the attention that Atget gave the world he loved. That, in fact, the subject does matter, and the photographer’s engagement with it was the photograph’s raison d’etre. The photo was merely a lasting and sharable byproduct of the artist’s attention. 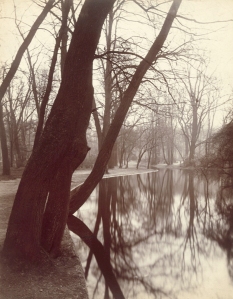 Atget was an indifferent craftsman. His photographs are often poorly exposed, a bit out of focus, show effects of lens flare from an uncoated lens; the prints are sometimes poorly processed and some are fading, or picking up spots and stains. In a Postmodern world, all these things might have been consciously introduced to make us aware of process in privilege over subject matter. But Atget was no such. The power of his work, and its attractiveness is in its naivete — or rather, its directness. Art theory cannot touch it, cannot sully it or soil it.

Soaking in the MOMA show, I fell in love with Atget’s art, but even more, I learned to mistrust the vox auctoritate. Just because a respected and learned expert speaks ex cathedra does not mean he is right. After all, a scholar is shooting in the dark, just as we all are. Just as Atget engaged with the things he loved, I tried my best to engage with his photographs and not be led into believing orthodoxies that had little to do with what I actually saw.

And this visit to 53rd Street also freed me to loosen my own approach to the camera and use it to engage with the things I love.

I have had many such life-changing encounters, small but meaningful. This was just one of them.