For nearly a century, we have seen Paul Cezanne through the eyes of his disciples. They have given us the popular and concretized version of who the painter was. A version to validate the century that followed.

And we have all been his disciples: No other artist has had a more profound or lasting effect on the art of the 20th Century. In some sense, Cezanne (1839-1906) invented Modern Art.

The problem is that Cezanne himself was more complicated, more equivocal than the simple image of his work and influence. And it would be good for us today to widen that narrow view to discover something else in his art that may still be fertile for inspiration and a way out of the locked room that Modernism has become. 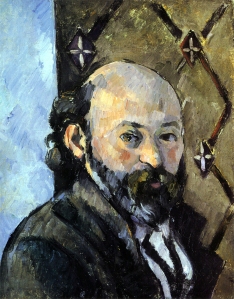 No one could miss the direct line between some of Cezanne’s paintings and the analytic Cubism of Picasso and Braque. And that visual kinship is reinforced by Cezanne’s own words: “Treat nature by means of the cylinder, the sphere, the cone …”

He mentioned often the need to see a canvas as a separate object, with its own rules, even if his prose is sometimes convoluted to the point it may cease making sense:

“… everything brought into proper perspective so that each side of an object or a place is directed towards a central point. Lines parallel to the horizon give breadth, whether it is a section of nature, or, if you prefer, of the show which the Pater Omnipotens Aeterne Deus spreads out before our eyes. Lines perpendicular to this horizon give depth. But nature for us men has more depth than surface, whence the need to introduce into our light vibrations, represented by the reds and yellows, a sufficient amount of blueness to give the feel of air.”

But even here, we find Cezanne concerned with something Modern art tends to ignore: The way the world looks.

Despite the modern appearance of his canvasses, Cezanne often wrote about that aspect of art he shared with the long centuries that went before him: The need to see the world clearly, and to attempt to record on his surface not only a version of the world as he knew it, but an accurate record.

“I had to become a student of the world again,” he said to Emile Bernard, “to make myself a student once more.”

We think of Cezanne as the man who made abstract art possible, but in his own words, he constantly talked of capturing the reality — the visual reality — of the world on his canvases. To be true to the world he saw and felt.

“You say that because two large pine trees are waving their branches in the foreground. But that’s a visual sensation … Moreover, the strong blue scent of the pines, which is sharp in the sunlight, must combine with the green scent of the meadows, which, every morning, freshens the fragrance of the stones and of the marble of the distant Ste-Victoire. I haven’t conveyed that. It must be conveyed. And through colors, without literary means.”

The painter writes and talks about the colors, the feel of the air on his skin, the smells of the forest, the give of the loam under his feet. He is veritably intoxicated by the things of the world.

“The world, the sun. .. that which is transient … that which we both see … our dress, our flesh, reflections … That’s what I have to concentrate on. That’s where the slightest error with the brush can send everything off course.”

What is different in Cezanne from the connection to reality in the Impressionists that preceded him is a faithfulness to what he would call the “permanent” or monumental quality of the things of the world. Monet might be more interested in what the sun does to those trees over the space of five minutes in the morning of a spring day; Cezanne hoped to capture some essential truth of the thing-itself. That meant finding something in the world that stayed essentially the same, no matter how the sunlight played over it through the course of a day, a week or a year.

This realization dawns on you if you visit Aix-en-Provence and see the architecture there. Those blocky houses he paints, so redolent of Picasso’s Cubism, are not a figment of Cezanne’s simplifying imagination. That’s what the houses actually look like.

Paul Cezanne felt a loyalty to the world, a sense that the things of the world inspire love and affection, and when transcribed to canvas, can be laid out almost like scripture for us. We all need to be reminded occasionally that “die Welt ist schoen,” as the photographer Albert Renger-Patzsch had it, and that through his canvases, Cezanne could capture that essential part of the world that we might miss when we fail to pay attention to what is around us.

They are, after all, the most real apples and pears ever seen that do not go soft and brown over time.

So, to see Cezanne only as a seed of Modern Art is to misunderstand the magnitude of his accomplishment.

At least for most people, there is little in the art world as dependably moving as a Cezanne apple or mountain. Painters, in particular, have always been astounded at the subtlety of his vision. It is said the Eskimos have 27 words for snow; Cezanne must have had 27 words for blue-green.